Is it Legal or Illegal to Record the Police? 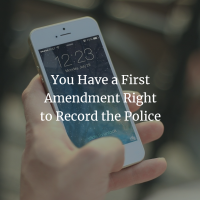 The action of recording police encounters, comes back around to fighting the police in the street. Since the police are the trained legal authority with the guns, you’re probably going to get hurt if you try to have a fight with them on the street. The appropriate place to fight the police is in the courtroom.

Fighting trained people with the guns is just not a good idea. Nothing that’s going to happen to you during a police encounter that is worth taking a beating or potentially risking your life over. So absolutely wait. Fight it out in court later.

For more on your rights, listen to our podcast, Tales from the Brown Desk.